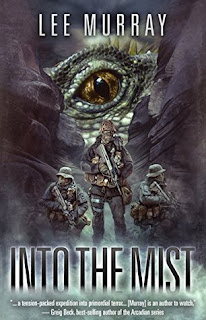 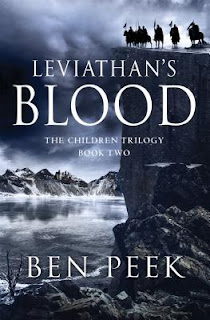 One... Leviathan's Blood is a bloody awesome name for a book.

And two... Leviathan's Blood is arguably one of the best modern fantasies to come out in years.

I must admit I some mixed feelings about reading Leviathan's Blood. Sequels usually struggle to reach the heights set by their predecessor, and I was worried that this book would follow in that common tradition. Peek's first book (The Godless) had been one of my favourites when it was released, and it still sits proudly on a shelf in my bedroom. So when Leviathan's Blood was announced I was excited, yet concerned. Would it continue to build upon that rich and expansive world that Peek had created in The Godless? Would it further take the genre of epic fantasy in new and exciting directions? And would it further cement Peek as someone whose work is a must buy for me? These questions all played across my mind as I opened the cover and started reading a couple of weeks ago.

Well, after finishing it I'm happy to say that my worries were unfounded. Peek has not only exceeded my expectations with this book, he has smashed them out of the park.

Leviathan's Blood is one of those books that has layer upon layer for you to appreciate. From it's vividly beautiful world building and dynamic societal examination through to it's diverse and wonderfully cast melting pot of characters, Leviathan's Blood is the book that just keeps on giving to its reader. There is literally something here for everyone. Love magic? Peek has you covered. Adore intricately woven plots and political clashes? Peek's got your back. What about scintillating action and wide ranging conflict? It has it in spades. How's about characters with agency that make you want to laugh, cry, and scream at the sky? Yeah, you get the drift.

I literally could not find any major faults with this book. I could be extremely picky and note that in some places the pacing felt a little off (I can attribute this to the non-linear styling of Peek at times), but that would be me picking at hairs. Overall I consumed Leviathan's Blood with gusto, and fell in love with characters like Ayae and Zaifyr all over again. I was genuinely disappointed when I turned to that final page. Up until that point I had become so enthralled with the story that hadn't noticed it was drawing to a close. That's the sign of a good and well told tale!

And now, as I write this review a couple of weeks after I finished it, I still find myself pondering the wonderful ways that Peek is reinterpreting the genre of epic fantasy. Peek can hold his head high amongst that group of fantasy writers (others include Staveley, Sanderson, Abraham, and Hurley) who are redefining the borders of epic fantasy and taking it to new places filled with excitement and uniqueness. What will the future hold with Peek on the scene and continuing to write brilliantly conceived fantasy? I have no idea. But damn, I'm excited to find out!

Leviathan's Blood is one of the most unique and enthralling epic fantasies that I have read in recent years. Peek's vision and execution are wonderful, and his deft and creative touch with this series a joy to behold. If Peek continues to write to this standard he will go down in history as a master of the genre.

The Evolution of a Reader.

Fifteen years ago I wouldn't have even glanced sideways at the horror section in a bookstore.

I would have marched directly into the shop and headed straight for the fantasy section without a single deviation in my stride.

And that was ok. At the time fantasy was (and to a certain extent still is) my jam. I just couldn't get enough of it. Lord of the Rings, check. Game of Thrones BEFORE it became a worldwide phenomena (yes people... the books started coming out in the nineties), check. The epic and wonderful sagas from our very own Sara Douglass. Check.

Nothing else existed in my minds eye. I lapped up the heroes and heroines, the wizards and warlocks, and the knights and the magical creatures over and over.

Since then, however, I have changed. I'm older and fatter. I have less hair, and the hair that I do have is rapidly fading to salt and pepper before my very eyes (when I can in actual fact see clearly out of my eyes, must remember to make that appointment at the optometrist).

I also, in this time, met my partner and fell in love. We moved a couple of times, bought and sold a house or two, and had a wonderful daughter who brought a light into our lives that I never knew could exist.

So naturally, my reading tastes have changed as well. I'm wiser then I was fifteen years ago (nineteen year old me was a shit really), and less tolerant of books that spin out the same old fluff over and over. As I have aged I have started to explore the other genres that all were filed loosely under the umbrella term 'speculative fiction' by readers and writers.

I still remember the day when I discovered the unearthly works of Stephen King. King opened my naive eyes to well written and fascinating horror, post-apocalyptic fiction, and weird westerns. Following this trend I dabbled in the crazy adventures of Hap and Leonard, as Joe R. Lansdale showed me just how fucking great characters could be when writing a tale. Excitedly, I even went backwards in time (not in a literal sense, never fear) and purchased the works of writers like Edgar Allan Poe and H. P. Lovecraft. Anything just to get a glimpse at something other than traditional fantasy.

Ultimately, however, what changed me the most as a reader was overcoming my introverted nature by starting a blog. Suddenly I was befriending fellow readers, writers, and social media commentators working within the industry I loved. I was tossed head first into the rich and tasty melting pot of recommendations and discussions on Reddit, and I was able to chat with fellow travellers about what they enjoyed and were reading at the time. My TBR pile grew astronomically, and my credit card balance got more precarious looking (funny that). I chipped away at that pile, and I was drawn into the gritty works of Joe Abercrombie, the fascinating steampunk worlds of Cherie Priest, and the clearly defined and incredibly unique magic systems of Brandon Sanderson.

And I'm still changing! Over the past few months I have started heading off in reading directions I never even imagined I would go. Weird westerns are still very popular, but I've found myself now reading a hell of a lot more horror. I have purchased and consumed all of the military horror anthologies from publishers like Cohesion Press, and Laird Barron has drawn me into his dark web and subsequently blown my mind with his tales from the Crone mythos. I've even started reading Clive Barker, on the recommendation of a author friend whose opinion I respect.

Now when I walk into a bookstore I tend to look at the horror section first, followed by the fantasy and science fiction sections. I'm sure in a few years time I will have changed yet again... that's just the way things are with getting older and reading.

I'm excited to see what the future brings... maybe I will get into paranormal romance? Yeah... that's not going to happen.

Be nice to each other, and keep on reading!

Matt
Posted by Smash Dragons at 09:38 No comments: