I picked up Bound, by Alan Baxter, on the recommendation of a friend. I owe that friend a few drinks now.

Bound is about cage fighter Alex Caine, a man who can see his opponents moves before they make them. Following a successful fight Alex is approached by an Englishman called Welby, who knows his secret and wants Alex to help him unlock the key to an ancient and powerful grimoire. Drawn into a world filled with magic, violence, and a chaotic Fey godling called Uthentia, Alex must harness his innate magical ability and fighting skills to prevent the end of the world as we know it.

Upon finishing Bound my first thought was 'damn.'

My second thought was that if Stephen King and Jim Butcher ever had a love child then it would be Alan Baxter. 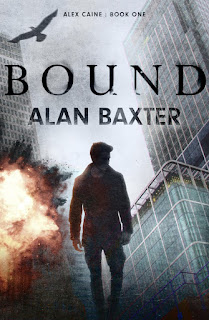 Finally, my third thought was that Bound is a seriously entertaining read.

Full of dark, gritty and bloody goodness, Bound is possibly one of the best debut novels I've read in many years. Cracking action and dialogue propel the story along at a fast pace as the reader journeys from the cages of the underground fighting scene in Sydney to the icy wastes of Iceland. I loved the fight scenes, and I could tell they were written by someone who has trained extensively in hand to hand combat and martial arts. I almost felt the bones being broken and smashed at times throughout the book, and their realism kept me enthralled. The world in which Bound is set was also gloriously gritty and full of things that go bump in the night. Dark horrors exist everywhere (the Three Sisters for example), and the world is full of mythical and supernatural creatures such as gargoyles and the Fey.

Alex Caine was also a fascinating protagonist. Flawed in many ways but still noble and honest, he was a believable hero who I couldn't help but cheer for as the odds kept stacking up against him. His rages, lust, frustration, and mistakes throughout the story only added depth to his character and made him more human. His dialogue and interplay with the other characters (like Silhouette) throughout the novel were also loaded with wit and humour that had me chuckling well into the night.

The other characters and creatures in Bound were also interesting. I loved the idea of the Kin, and the dark horrors like the Three Sisters and the Subcontractor. However, the two characters I absolutely adored were the evil duo of Mr. Hood and Miss Sparks and their Black Diamond Inc. They are the perfect narrative foil for Alex and Silhouette, and their dark and twisted relationship and actions brought a real nefarious essence to the story that was both creepy and strangely thrilling as well.

All in all Bound was a bloody excellent read. I cannot recommend this book enough to fans of Butcher and Wendig.

smashdragons.blogspot.com.au
Posted by Smash Dragons at 15:31