As the Weave breaks down and Pierre Jnr's control over the population becomes complete, who - if anyone - will be able to stop him? 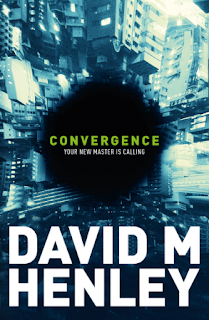 I will admit that I have been looking forward to Convergence for months. I read The Hunt for Pierre Jnr when it was first released and was blown away by its quality. I quickly found myself impatiently waiting for Manifestations, and in turn gobbled that up with glee when it was released.

So it's probably fair to say that I am a fan of Henley's.

So when Convergence was released I was incredibly excited. But as I sat down to start reading it a couple of questions popped into my head.

Would it live up to the previous books? Or would I be disappointed with the finale and be calling for Henley's head? (note... I really wouldn't do that David... I'm a nice guy... honestly!)

Luckily for David, this did not turn out to be the case!

We start Convergence with everything literally falling to pieces. The Weave is breaking down, uprisings are taking place, new movements are forming, and Pierre Jnr is cementing his control over the population. And it all unfolds from there.

So what was amazing about Convergence? Everything basically. Henley's characters are again diverse, engaging, and multi-dimensional in this book. I continued to adore the characterisation of Pierre Jnr as the story unfolded, and I loved the increased development of characters like Peter and Pinter. Other favourites like Tamsin and Ozenbach also featured prominently, as the societal upheaval that started in Manifestations continues to spread.

The world building is again also stunning, with Henley continuing to craft a setting that is both enthralling and imaginative. One of the things that I love about Henley's writing is that (like all great science fiction writers) it is often grounded in concepts that already exist. The Weave has a direct connection to the internet, and the Will can already be seen emerging in our various forms of social media. I also adored the political concepts and commentary that were once again explored in Convergence, and I loved how the themes of freedom, power, and control continued to resonate in this conclusion. Add to this heady and thoughtful universe things such killer bots, artificial intelligence, war, revolution, cloning and psionic's and you have a mix that is both beautiful, dynamic and brutal at the same time.

The pacing and action of Convergence also blew me away, with the story often exploding out from the pages in ways that had me both exhilarated and horrified at times. I often found myself losing track of time as I read, with events like mass gassings, murder, psionic and mob uprisings and the continued hunt for Pierre Jnr keeping me hooked until the very end. Looking at events unfold through the lens of the Weave was also fascinating, with the undertones of our very own modern day news cycle there for all to see. Even now, a week after finishing Convergence, I still find myself thinking about the concepts that were explored in this series. I don't think I will ever look at social media the same way again.

So basically, I loved this book.

Convergence is everything I want from a great science fiction story. It is immersive, challenging, thoughtful and gripping. I was hooked from the start and it steadfastly refused to let me go until the very end in what was an amazing and very satisfying conclusion to the series. An absolute must read for anyone even remotely interested in speculative fiction, Convergence is a stunning and extraordinary vision of a possible future reality!

One of my favourite reads of the year so far!

Note - A review copy was provided.