I know what you're thinking.

They've been done to death. Howls in the night. Silver bullets. Full moons. All that jazz. Thousands of interpretations drowning us all in the same thing.

Over and over again.

But please, bear with me and read on... because Mongrels may well be one of the finest werewolf stories I've ever read.

Stephen Graham Jones is no stranger to me as a reader. I've read many of his short stories in the past, and adored their scintillating and often brutal tones and realism. In fact I'd probably argue that he is one of the most exciting genre writers in the game right now. So when I heard about this novel I was excited.

Then I realised it was a novel about werewolves, and my excitement dissipated rapidly. 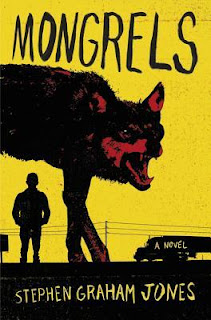 Like a lot of people, I'm over them. You see one too many Underworld movies, or hear someone in your family declare themselves for Team Jacob (please kill me now), and the gloss on our lupine friends loses some of its shine.

So when Mongrels was released I passed on picking up a copy.

I moved onto the next book in my TBR pile, and didn't give it a second thought until I noticed a copy of it sitting at the library a week or so later. I had time to kill before I picked up my daughter from school, so on a whim I decided to read a couple of chapters. Fifty pages later, I borrowed the book and raced to collect my daughter before I was late. I never looked back from that moment on.

Mongrels is a coming-of-age story told by an unnamed narrator living with his Aunt Libby and Uncle Darren as they shift from place to place across the southern states of America. They only have each other, and a secret. Theirs is a family of werewolves. Following this revelation Jones takes you on a masterful, and at times brutally realistic journey that touches on a raft of themes such as self esteem, adolescence, poverty, family dysfunction, and a world that is incredibly hostile and dangerous to their kind. Compounding this is the fact that the narrator is also 'late bloomer', and as such he finds himself alienated within his own dysfunctional little family even as he wrestles with adolescent problems such as starting a new school every few weeks as his family runs from the law (and other threats).

Jones' take on werewolves, told with his distinct and wonderful voice, is enthralling. They are drifters who essentially scrape through by living on the edges of society. Jones brings them down to a more realistic level, and removes all of the supernatural mystique that usually surrounds them. They aren't legendary creatures springing out of our folklore and chasing overweight and tasty campers in the woods... they just are werewolves. Many familiar elements are explored, such as where all the fur goes when they revert back to human form, and some are even dismissed outright (no more fucking full moons needed people!). There is even an explanation provided about why werewolves hunger so much (and a discussion had about calorie intakes that had me snorting with laughter), and a running theme about werewolves needing to be careful about what was around them when they transformed (they get hungry... and some things just aren't... edible). In fact one of the most impressive things about this book was how Jones takes what is a legendary creature, and recasts it wonderfully via his characters. I loved Darren, whose idiotic and humorous behaviour had me either choking with laughter or shaking my fist, and Libby, who reminded me of my grandma (a beautiful soul focused on looking after the family no matter what... and with the ability to kick the living shit out of you if you stepped out of line and crossed her). However the unnamed narrator is what takes this book to a whole new level. Poignant, thoughtful, and at times incredibly sad, the narrator is the glue that holds this story together and propels it to places I never imagined could be explored.

I was also awestruck by the direction that Jones took the story in. Darren's antics, cast alongside the terrifying situations that the family often finds themselves in, makes for fascinating reading. The melancholic mood that also lingers around adds a real tension to the story that both the reader and the characters can't escape from. They can't form relationships (for obvious reasons... spanner in the works if you violently kill and eat your neighbour), and they know that every day may well be their last. There are curious hunters, the law, and even other threats to worry about. All they have is each other, and even then that bond is under constant pressure from forces both external and internal. Whilst Mongrels is not a horror story, there are moments of violence and horror that keep you on the edge of your seat as you read. Jones manages to pace things wonderfully, and the final pages left me both moved and deeply satisfied.

This is the type of story I live for, and I am incredibly grateful that I had some time on my hands that stormy afternoon at the library (I've since purchased my own copy for my shelves).

Masterful and enthralling, Mongrels dusts off a legendary creature, recasts it brilliantly, and shoves it howling down your throat.

You can buy Mongrels at all good book retailers. For more information (and purchase details from Amazon) go here. You can also keep track of Stephen (preferably in a non-stalker kinda way) by checking out his site.
Posted by Smash Dragons at 12:53