The Red Queen has set her players on the board...

Winter is keeping Prince Jalan Kendeth far from the longed-for luxuries of his southern palace. And although the North may be home to his companion, the warrior Snorri ver Snagason, he is just as eager to leave. For the Viking is ready to challenge all of Hell to bring his wife and children back into the living world. He has Loki’s key – now all he needs is to find the door.

As all wait for the ice to unlock its jaws, the Dead King plots to claim what was so nearly his – the key to the underworld -- so that his dead subjects can rise and rule.

I was late to the Mark Lawrence party.

I can actually hear your boos and cries of disdain over the clicking of my keyboard. 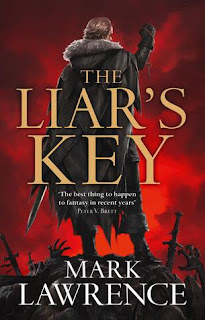 In my defence, Lawrence and his books quickly found themselves taking pride of place on my shelves once I had actually read them. The Broken Empire was dark, revolutionary, and addictive. Fantasy crack that I just couldn't get enough of. Jorg not only captured my imagination but proceeded to kick it to the ground and stomp on it as his destiny unfolded before me. I literally couldn't get enough of that trilogy.

The Liar's Key is even better.

Kicking off from ending in Prince of Fools we once again return to Trond, where Jalan and his companions have spent the winter following their journey and subsequent events at the Black Fort. As the ice recedes Snorri, now in possession of Loki's Key (a magical key that can open lock, even the one of death's door), decides to head out on his personal mission to resurrect his slain wife and children. However, other forces and agents are lurking in the shadows. And Loki's Key, an incredibly powerful item, is a very tempting prize.

From this opening The Liar's Key drives forward and never lets up. I loved so many things about this book, from its insanely riveting world building through to its brilliant turn of phrase and storytelling. However, what makes The Liar's Key (and all other Lawrence books) special is its memorable characters. Jalan and Snorri, joined by other companions such as Kara and Hennan (a witch and orphan boy), form an enthralling group that is both fresh and incredibly intriguing. Each member brings something different to the table, and each has their own reasons for staying in the party. I adored the growth and evolution of both Snorri and Jalan throughout this book, and their bond and relationship remains the beating heart of this tale. Snorri, weighed down by the responsibility and guilt over the death of his wife and children, becomes more withdrawn and less certain as the plot unfolds. Jalan, on the other hand, comes into his own. As a self described coward, liar, and cheat, Jalan has to constantly fight against his better nature in order to maintain this description as the group travels South. It was wonderful reading to actually see him transform at times, and his internal monologue is yet again both hilarious and filled with wit. What really fleshed out Jalan for me however was his magical and blood fuelled flashbacks. These flashbacks, used by Lawrence before as a literary device in previous books, revealed much of Jalan's backstory and soul. They also gave the reader an insight into the Red Queen (and how she became known as this) and the Silent Sisters. This really added a depth to Jalan and the world that he comes from that was lacking in Prince of Fools. Prior to this book I had always considered Jalan to be the poor man's version of Jorg. Not anymore.

The action is also exciting and heart pounding with every turn of the page. Lawrence goes to great lengths to up the tempo and stakes of each and every clash, and I adored how a seemingly mundane encounter could turn deadly in an instant. The Dead King's minions are a constant threat, and necromancers, undead, and various other abominations and creatures plague the group at every step. I often found myself going back to the start of chapters just so I could reread what happens again, and to soak up the atmosphere that Lawrence so cleverly creates. There are amazing sacrifices, mayhem, death, and plenty of destruction as the story builds rapidly from the start to a cliffhanger that literally left my mouth opening and closing like a fish trying to breathe out of water.

The world of the Broken Empire is finally fleshed out more in this book in all of its gritty and epic glory. One of the deepest pleasures I had with Mark's original trilogy was deciphering the clues about the setting and the catastrophic events the led to its forging. This continues in the Liar's Key, with the reader seeing a much greater breadth of the world through Jalan's eyes. There are modern references littered through the text (CERN anyone?), and the world is depicted and described in a richer and fuller way then ever before. It is a dark and dangerous place, but damn it is addictive!

All in all The Liar's Key is simply amazing. Lawrence continues to grow as a writer (which in itself is fucking incredible seeing as his debut was mind blowing) and storyteller with this release. I adored every single page of this book, and I can't wait to find the time to reread it in full again. If fantasy was a drug then The Liar's Key would be the most pure and addictive form of heroin known to humanity!

An absolute must read for anyone with a functioning brain and a heartbeat.

A review copy was provided.
Posted by Smash Dragons at 12:08