Review - If Then by Matthew De Abaitua

In the near future, after the collapse of society as we know it, one English town survives under the protection of the computer algorithms of the Process, which governs every aspect of their lives. The Process gives and it takes. It allocates jobs and resources, giving each person exactly what it has calculated they will need. But it also decides who stays under its protection, and who must be banished to the wilderness beyond. Human life has become totally algorithm-driven, and James, the town bailiff, is charged with making sure the Process’s suggestions are implemented.

But now the Process is making soldiers. It is readying for war — the First World War. Mysteriously, the Process is slowly recreating events that took place over a hundred years ago, and is recruiting the town’s men to fight in an artificial reconstruction of the Dardanelles campaign. James, too, must go fight. And he will discover that the Process has become vastly more sophisticated and terrifying than anyone had believed possible. 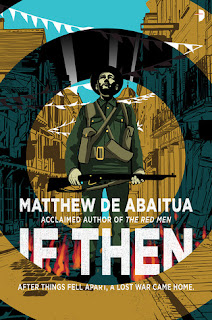 I stumbled upon If Then whilst browsing online one day. I can't recall the exact circumstances, but I remember thinking that it sounded cool and weird. So when I finally had the opportunity to read this story I expected a tale that would fascinate and throw me off balance at the same time. And boy, was I not disappointed!

If Then tells the tale of a post apocalyptic town that survives under the control and protection of computer algorithms called the Process. The Process runs everything, from food and job allocations right down to who stays in the town and who is banished. Sound weird? It is! Everything seems to be going swimmingly, until the Process starts making soldiers to fight in events that it is recreating from the past. When James, a citizen of the town, is forced to go and fight in an artificial reconstruction of the Dardanelles campaign from World War One, he discovers that the Process has evolved into something more terrifying and dangerous than anyone could imagine.

I loved so many things about this book, from its surreal and weird setting right through to its horrific action sequences and off balanced tone. De Abaitua does a superb job of drawing you into the world he has constructed in If Then. Lewes is a perfectly described rural community, and at first you are led to believe that it is just like any other pastoral society. That is until De Abaitua sprinkles his narrative with tidbits about neural impulses, drones, and computer algorithms. This environment of normality broken by reminders of its constructed nature constantly threw me off balance and kept me enthralled as the story progressed. The Process itself, and how it controls humanity, is also incredibly well described and creepy. I adored the dark and cold tones of its reign over humanity, and found its management of Lewes fascinating (albeit very cruel in a cold and rationalistic way).

I also adored the characters of James and Ruth, and how they both evolved as the mysteries of the Process and the town were revealed. Their discovery of a construct called Hector, right through to James serving as a stretcher bearer in an artificial Dardanalles campaign, is what drives If Then.  Through their eyes De Abaitua takes us on a journey that not only explores the horrific nature and senselessness of war but also asks questions about the value we place on people beyond an economic sphere. Ruth in particular does this magnificiently, when she questions the existence of the town and her husband's role in it (James is the town's bailiff). This philosophical and thoughtful tone worked brilliantly throughout the novel, especially when it was also incorporated alongside the horrors of trench warfare or a forced eviction from the town.

And the action sequences... holy hell... horrific... jarring... and utterly encapsulating the utter waste that occurred in World War One. As someone who has studied war (I have post graduate credentials in military history) I was stunned by the accuracy and sheer hopelessness that De Abaitua was able to capture in this story. The pace was also frenetic, just when I was feeling level and settled I was thrown off balance by a twist or insertion of weirdness that added yet another rich layer to an already complex tale. If Then is only 400 odd pages, but it feels like a much larger and deeper tale due to De Abaitua's skill at weaving an amazing story.

If Then is an incredibly enthralling and original tale that still has me thinking about it weeks after I read it. A brilliant entry onto the scene, If Then is a must read for anyone even remotely interested in speculative fiction.

A review copy was provided.
Posted by Smash Dragons at 10:38