A Shattered Empire by Mitchell Hogan

Finally... A Shattered Empire is here! IT'S HERE!

I have waited for this moment since finishing Blood of Innocents... and NOW IT'S HERE!!!

In my defence I have every reason to be. Hogan is one of the most exciting fantasy writers on the scene right now, and his Sorcery Ascendent books are like crack cocaine to fantasy fans. They include swords and sorcery, murder and mayhem, quests, and the end of the world. What more could you ask for?!?

Don't believe me? Read on. The amazing folks at Harper Voyager have graciously invited me to participate in their sneak peek blog tour, and they have sent me an amazing excerpt to share with you all!

So lap it up... wet your whistle... and let the celebrations begin!

This is an extract from A Shattered Empire by Mitchell Hogan which is published by Harper Voyager and available in all good book stores and online now.

Horns resounded through the air. Regiments of Quivers called to arms, woken from fitful camps surrounded by their dead comrades. Caldan watched as hurried breakfasts of cornmeal bread and cheap red wine were consumed before armor was donned and weapons checked. He hadn’t slept much himself, just a few brief spurts in between worrying over his encounter with the emperor and what would happen to him now that he was in the hands of the warlocks. 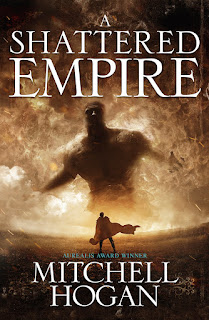 Long lines of soldiers snaked in from the front ranks, exhausted from battling the jukari in the darkness and holding them off until dawn broke. There had been dozens of isolated pitched battles, both sides hampered by the lack of light, which was mercifully clear of the lurid taint of destructive sorcery. The vormag, and it seemed the warlocks, were content to wait.

Or perhaps they were also exhausted.

The returning soldiers passed formations of fresh troops, dirt- and blood- splattered armor contrasting with gleaming hauberks, to collapse at the rear of the army in relative safety. Wounded Quivers were dragged or carried to the physikers, who were set up in lines— implements still dirty from being used throughout the night. There would be no rest for the physikers and their assistants for some time.

Now, hundreds of horsemen were saddled and waiting on the edges of the emperor’s main forces. Commanders rode among the cavalry and foot- troops— bowmen and spear carriers— while the warlocks split into small groups and placed themselves in scattered locations among the forces.

From the river, hundreds of soldiers were swarming out of the recently docked ships. They formed up in ranks, bearing great round shields and broadswords, while those behind them wielded twohanded axes or long spears. Who they were still puzzled Caldan, but it seemed safe to assume they were reinforcements the emperor had arranged.

Except, of course, Devenish had been surprised at their arrival. But maybe the emperor hadn’t felt the need to inform the warlocks of his plan.

One of the Quivers guarding the warlocks’ tents came up to Caldan and handed him a wooden plate filled with cornbread and cheese, along with dried fruit and nuts. He also gave Caldan a steaming mug of honeyed and salted coffee. Caldan ate the food absentmindedly, keeping his eyes on what was happening.

To one side were the walls of Riversedge, and to the other they relied on a series of hills to offer some protection. And then there was the river itself, stretching mirror- bright to the east as they looked into the sun, and pale upstream to the west. A massive stretch of water, a barrier to the jukari— one they’d already shown kept them at bay.

Quivers formed up— as large a force as any the Mahruse Empire had gathered in centuries. The Noble Houses amassed their troops and assembled behind the Quivers. Having followed the emperor and his army— expecting to merely attend the fighting in name only, to be recognized in the honor rolls when the Indryallans were pushed back into the sea— the nobles now found themselves in the middle of a fight against a monstrous horde of creatures from the Shattering.

It wasn’t clear to Caldan if they were more afraid of the jukari or of disobeying the emperor.

All around the army, warriors and nobles alike made familial gestures and mumbled prayers to their ancestors to keep them from harm. Some burned offerings, and along with the campfires, smoke hung thick above the host, obscuring the standards flapping in the breeze.

From Caldan’s position close to Devenish’s tent, the army seemed composed of chaos with only a few pockets of order.

There was movement in the front ranks, and shouts broke out. Caldan stood and looked past the human army. Farther away, he saw streams of jukari approaching, far less orderly than the Quivers. They stopped a few hundred yards away, the tips of their lines swelling like water pooling, until their numbers grew past his counting. They bellowed and snarled, a terrible, animal sound.

Commands roared throughout the emperor’s army, along with curses and battle songs.

The Quivers marched out to answer the jukari, armor and weapons flashing in the sun. Drums pounded, horns pealed, booted feet stamped. Commanders dispersed among their troops, though Caldan noted that most led from the rear.

Heavy thumps sounded from Riversedge, and at first Caldan couldn’t work out what was happening. Then he saw specks arcing into the sky: missiles thrown from counterweighted trebuchets. He squinted as they reached their zenith and began plummeting to the earth. A low rumbling sounded. Clouds of dust and clods of dirt erupted where the stones landed— but nowhere near the jukari. All the missiles fell short by hundreds of yards, with more following in the air.

Hoots and barking came from the jukari, who stood their ground, attention on the falling rocks.

Overeager? wondered Caldan. They had to know their shots would fall short.

Then he saw that while the jukari’s attention was on the siege engine missiles, groups of Quivers had run to the front of their ranks, using the gaps between cohorts. They dropped baskets of arrows, raised their bows, and began firing. Missiles streaked into the sky, a dark rain ascending to the heavens, only to fall. Their shafts plunged into the jukari— failing, as far as Caldan could see, to do much damage. But some jukari did fall: tiny figures in their front lines stumbled.

The holes opened up by wounded or dead jukari were quickly filled.

Thunder rumbled, and Caldan frowned. He glanced to the sky, fearing sorcery, of which there was no sign— but there was movement on the hills. He squinted . . .

And let out a gasp.


If you want to know more about A Shattered Empire head on over to Harper Voyager. Purchase information for a variety of retailers is also available from that link.

To read more cracking excerpts go back to the start here at Harper Voyager. Dark Matter Zine will also continue the party tomorrow, so remember to head on over to that site for more awesome reveals!

In the epic conclusion to the series that began with the award-winning A Crucible of Souls, Mitchell Hogan combines the wonder of classic sword-and-sorcery fantasy with the grit of the modern masters.

In a battle of armies and sorcerers, empires will fall.

After young Caldan's parents were slain, a group of monks raised the boy and initiated him into the arcane mysteries of sorcery. But when the Mahruse Empire was attacked, and the lives of his friends hung in the balance, he was forced to make a dangerous choice.

Now, as two mighty empires face off in a deadly game of supremacy, potent sorcery and creatures from legend have been unleashed. To turn the tide of war and prevent annihilation, Caldan must learn to harness his fearsome and forbidden magic. But as he grows into his powers, the young sorcerer realizes that not all the monsters are on the other side.

And though traps and pitfalls lie ahead, and countless lives are at stake, one thing is certain: to save his life, his friends, and his world, Caldan must risk all to defeat a sorcerer of immense power.

Failure will doom the world. Success will doom Caldan. 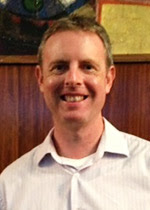 When he was eleven, Mitchell Hogan was given The Hobbit and The Lord of the Rings to read, and a love of fantasy novels was born.

When he couldn’t stand putting off his dream anymore, Mitchell quit his job and finished the first draft of A Crucible of Souls. It won the 2013 Aurealis Award for Best Fantasy Novel and was listed as one of the Best New Series by Audible for 2014. Mitchell lives in Sydney, Australia, with his wife and daughter.

You can find out more about Mitch at his website: http://mitchellhogan.com