Not because Crow Shine is a bad book. Rather, it was hard because it was so damn good. I've been a fan of Alan Baxter's work for a number of years now. I adored his Alex Caine series, and I've consumed most of his short fiction work with gusto and glee. So when I heard he was releasing a short fiction collection that included some new and original stories I was beside myself with excitement and anticipation. 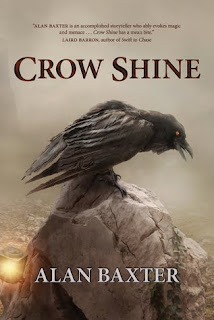 Fast forward a few months, and after turning the last page of Crow Shine I found myself sitting and pondering the immensity and power of what I had just read.

I was still there thinking an hour later.

Crow Shine is an amazing ensemble of rich and powerful dark fiction that, to put it simply, blew me away. The book opens with the title story "Crow Shine", an intoxicating and heady tale of magical brews, dark choices and soulful music. I adored the imagery in this story, and its exploration of whether or not we are fully in control of our choices was enthralling. The next story, "The Beat of a Pale Wing" was also brilliant, with Baxter injecting dark and ritualistic magic into a story about disposing bodies, revenge, and gangsters. He follows up this brutal and dark story with a short that damn near broke me. "Tiny Lives" is a powerful and heartbreaking account of a toymaker who creates clockwork miracles for customers in order to raise money for his sick daughter. A tale of a father's ultimate sacrifice and love for their child, I openly wept after reading the ending. Baxter continued to tear at my mind and soul with "Old Promise, New Blood", a story about family, pacts, and blood magic, and "In the Name of the Father", a creepy account of a priest whose ministry leaves a path of victims in his wake. This pattern continued as Baxter explored the concepts of justice and death in "Shadows of the Lonely Dead". "The Chart of the Vagrant Mariner" then took me to the depths of madness in what was an incredible tale of pirates and cosmic horror, and "The Old Magic" broke my heart all over again as a witch watches her loved ones die around her as her longevity comes back to bite her. A truly poignant and gut wrenching tale that left me staring at a wall and pondering my own mortality for ages afterwards.

All in all I couldn't find one weak story in this collection. I savoured reading it, and will read it all over again soon. Baxter is a masterful storyteller whose ability to pull apart the membrane of reality and explore the voids in-between marks him as one of the best dark fiction writers in the world today. His work has breadth, scope, and intensity, and it prompts readers to ask questions of themselves and of life itself. It delves into places that are uncomfortable and terrifying, and it delights in the shades that form the basis of our lives and the decisions we make.

The human condition lies at the beating heart of this book, and it's a testament to Baxter's skill as a writer that he handles this with both subtlety and power. Crow Shine is raw, and it is incredibly emotional. It is dark, and at times it is even darker still. There is, more often than not, very little light at the end of the tunnel. And it is, most of all, truthful and honest about our existence. Sometimes, as Baxter writes in his afterward, the dragons do win.

Hands down one of the best collections I've ever read, and a book that will take pride of place on my shelves. Formidable storytelling.

Crow Shine is available now online at all good book retailers. Go here for more information, and to check out some of the amazing writers who have blurbed this brilliant collection.
Posted by Smash Dragons at 13:07