Book Review - Those Above by Daniel Polansky

They enslaved humanity three thousand years ago. Tall, strong, perfect, superhuman and near immortal they rule from their glittering palaces in the eternal city in the centre of the world. They are called Those Above by their subjects. They enforce their will with fire and sword. 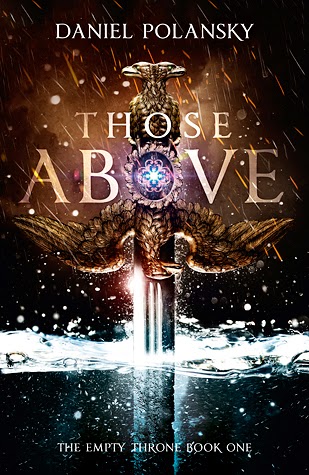 Twenty five years ago mankind mustered an army and rose up against them, only to be slaughtered in a terrible battle. Hope died that day, but hatred survived. Whispers of another revolt are beginning to stir in the hearts of the oppressed: a woman, widowed in the war, who has dedicated her life to revenge; the general, the only man to ever defeat one of Those Above in single combat, summoned forth to raise a new legion; and a boy killer who rises from the gutter to lead an uprising in the capital.

I approached Those Above with an almost giddy like excitement. I previously have adored Polansky's work in the Low Town universe, and the premise of this novel had me jumping up and down in anticipation. Every time the mailman came to deliver a package to my door I was hoping it was Those Above. Finally, the book arrived, and boy was I not disappointed.

Those Above is Polansky's first foray into what can arguably be described as epic fantasy, and it is a vastly different reading experience to what many people might expect. Focusing primarily on four different points of view, Polansky takes the reader on a journey of masterful world building and intricate characterisation. We are first introduced to Bas, an army general, early on. Bas is the only human to have ever defeated one of the immortals in combat, and it is this sticking point that makes his character so enthralling. He is brilliantly painted throughout the story, and I adored how he interacted with those around him because of it. Eudokia is also of a similar vein. She is the power behind one of the human thrones and has been setting in play her plans for revenge against the 'others' for decades. I particularly liked the political intrigue and manuevering that surrounded her chapters, as well as those of Calla, a human assistant and representative for a well placed immortal in court. Calla's chapters gave me a fascinating insight into the thoughts and motivations of the immortals, and really fleshed out their alien-like nature. The final viewpoint is that of Thistle, a young brawler who is born into poverty and now has to fight for everything in his life. Thistle's chapters incorporated the more familiar tones of grit and grime that I usually associate with Polansky's writing, and it was wonderful to read the transition from this dark and brutal existence to the more lofty and noble setting of Eudokia's chapters.

This is one of the highlights of Those Above. The world building is immersive, detailed, and vivid, with Polansky shifting seamlessly from the glittering halls of the Roost (the immortal's domain) to the lowliest criminal establishment page after page. I loved the level of detail that Polansky included in this book, and I adored how despite this he still left many grey areas in which to explore in future releases. The immortals are also portrayed brilliantly, exhuming a creepy and disconcerting aloofness and arrogance that that had me on edge from start to finish, and I loved the simmering hatred of them that oozed out of every facet of humanity throughout this book.

The flow and pacing in Those Above is also very surprising. For the first half the book Polansky lays down a solid foundation on which to build, fleshing out his protagonists and the world in which they live. As a result the pace of the story does suffer at times, but overall this didn't bother me too much. I usually don't mind a slower narrative so long as I can see the end game coming (as was the case with Those Above). The second half of the book speeds up dramatically, and the four protagonists and their plot threads weave together and gain momentum, eventually reaching a crescendo in what was a very satisfying ending (and lead in to the sequel).

All in all Those Above is an amazing and cracking release that I enjoyed on many different levels. Polansky has shown with this book that he is not a one trick pony, and I cannot wait to see what he will produce next. An enthralling epic fantasy that will only get better and better, I would highly recommend this book to anyone with even a slight interest in speculative fiction.

A review copy was provided.
Posted by Smash Dragons at 13:10