Have you ever read a debut novel from an author and thought to yourself, 'yeah, this writer has something special.'

Well that's how I felt when I first stumbled upon When the Heavens Fall by Marc Turner. It had everything that I loved about fantasy. Sprawling landscapes and cultures, intense magical combat and action, and intelligent and fascinating characters with agency. So when I heard that Turner's next book was coming I was extremely excited. I couldn't wait to dive back into the world that Turner had engineered in his debut.

And then I found out that Dragon Hunters would be focused on an entirely new set of characters and a new setting.

Alarm bells began to ring in my head, and my high hopes for the sequel started to fall. However, after finally reading it (moral of the story... don't judge something you haven't read yet!) I came to the conclusion that I was wrong.

This book not only equals When the Heavens Fall, it exceeds and eclipses it. 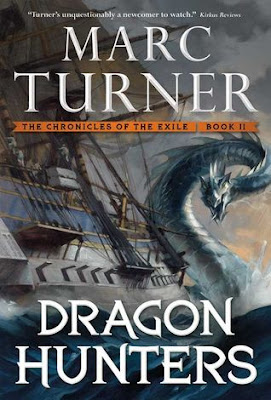 Dragon Hunters tells the story of the Storm Lords, a fellowship of water mages who rule the empire known the Storm Isles. Their leader, Emira Imerle Polivar, is coming to the end of her tenure as leader. But Polivar has no intention of standing down without a fight. Once a year, the fabled Dragon Gate is raised to let a sea dragon into the Sabian Sea, where it is hunted by Imerle and the Storm Lords. This year however Imerle plans to sabotage the Dragon Gate and destroy the Storm Lords dynasty. But Imerle is not the only one plotting and scheming, and when the sabotage of the gate is set in motion new enemies will appear amidst the chaos and destruction.

So what did I love about this book? Everything (seriously). From its scintillating action through to its intelligent and enthralling narrative and dialogue, Dragon Hunters is a roller coaster ride filled with intensity and glory (unlike When the Heavens Fall, which was more of a slow burn). Turner has really ramped it up with this book, deploying a bucket load of well crafted and intense nautical sequences (which I love) and insanely brilliant battles with great sea dragons.

And fuck me... those sea dragons. This book contains one of the best representations of dragons I've ever seen in a fantasy book. Period. They are brutal killing machines... alpha predators that give even the powerful Storm Lords a run for their money.

The characterisation was also amazing in this book. All of the players, from Imerele through to Webb and Flood had depth, charm, and agency. This is one of the areas that Turner has really shown improvement in since his debut, and it was great to see him control a large cast of characters with real skill and finesse. 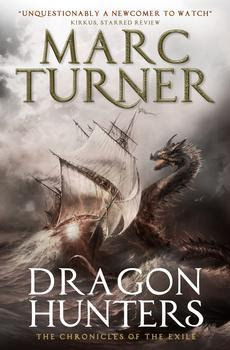 The world building was, like in When the Heavens Fall, layered and filled with history and lore. I adored the nautical setting in a lot of the sequences, and was enthralled at how Turner linked this book back to his debut. Turner has a real skill when it comes to designing fantasy worlds, and I chewed up all of the tidbits that he planted throughout the plot.

The pacing was fast yet perfectly controlled and structured. This is the key difference between this book and When the Heavens Fall. Dragon Hunters is more reminiscent of an cracking sword and sorcery tale, filled with magic, monsters and mayhem. I loved the sense of adventure I got from reading this story, and the ending left me yearning for more from this world.

Dragon Hunters doesn't have any weaknesses in my opinion. It is a perfectly balanced and well told tale filled with carnage and brutal delight.

I am stoked that I read this book... and Turner has impressed me so much that he has now been added to the list of authors whose work I will always buy.

If you like fantasy then you have to read this book. Do yourself a favour and buy it now.