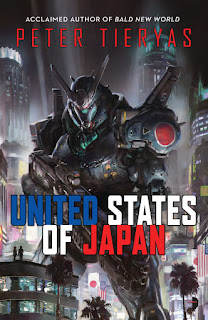 I remember when I first heard about the United States of Japan on the grapevine. I had logged onto social media, and saw one of my friends going apeshit about some concept artwork for a project that was in the works. After a moment searching and clicking on links I was presented with giant mechs adorned with the Rising Sun. The United States of Japan. The spiritual successor to The Man in the High Castle (one of my favourite stories.. period). I was sold from that moment on. I tracked the updates for this book with utter zeal and fanaticism. I touched base with Tieryas and let him know how excited I was for this book, and that I was looking forward to its release. I worked myself into such a frenzied state of anticipation that I would lurk every night online looking for more news or photos to sate my need.

And then it dawned on me. What if Tieryas couldn't live up to the hype? What if the United States of Japan was a poor successor to arguably one of the most influential speculative fiction pieces of the twentieth century?

Fortunately, the United States of Japan is not the poor successor to The Man in the High Castle. And Tieryas not only has lived up to the hype, but exceeded it in ways that are simply breathtaking and exciting.

The United States of Japan continues the journey that was started by Phillip K. Dick back in the 1960s. Set in an alternative 1980s, the United States of Japan depicts a world where Japan won World War Two. Most Americans now worship the Emperor, and history has been changed to a point where Japan's role in the war is now viewed to be nothing short of exemplary and honourable. Japanese civilisation stands unchallenged at the pinnacle of technological development and cultural dominance, until now. A group, known as the 'George Washington's' are starting to disrupt the regime by spreading an underground game that allows players to imagine a world where the Allies won the war. In order to stop these attacks video game censor Captain Beniko (hereafter referred to as Ben) Ishimura and secret police operative Akiko Tsukino are assigned to solve the mystery of this revolutionary group and stop it. But everything is not as it seems, and the enemy they are hunting may in fact not be the enemy after all.

I loved everything about this book, from its amazing cover through to its incredibly dark and twisted plot. The United States of Japan took me on a journey that not only entertained me but also challenged me on many different levels. The story itself not only pays homage to Phillip K. Dick, but also forges a new path with the ideas and themes that Dick toyed with in his work. Notions of power, truth, memory and prejudice are all fleshed out and examined within the plot, as the players of the story all maneuver and vie for dominance. I adored the characterisation throughout this book, and Ben and Akiko's relationship and dialogue was both a subtle yet powerful reminder of how agency is the heartbeat of every good tale. The action sequences were a joy to behold, and the pace energetic yet controlled as Ben and Akiko slowly peeled back the layers of the mystery that surrounded them. The world itself was both rich and meticulous in its design, with Tieryas doing a magnificent job of imagining what a technologically advanced and post cyberpunk world ruled by an oppressive regime would look like. With every new page little tidbits were revealed, from Japan's technological prowess (genetic engineering, biomechanics, communication devices, giant mecha) through to their cultural influence on the world (via ceremonies, fashion, language, and food). Admirably Tieryas, whilst showcasing this world, never succumbs to any info dumping or telling. Everything is perfectly balanced and wielded as the story unfolds. All of these elements combined perfectly to give the United States of Japan a dark and moody tension and sense of consequence. One wrong word let slip, or overheard by an 'innocent' bystander, and that person simply disappeared. 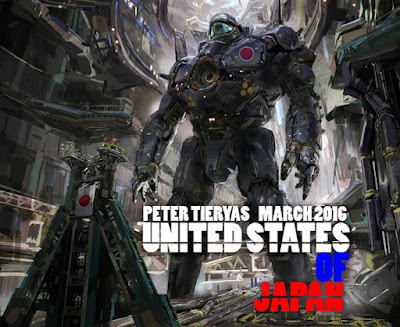 And therein lies the beauty of this book. It is a dark thriller at its heart, but it is laced with elements of science fiction, alternative history, philosophical discussion and war fiction. And damn, it is a wonderful combination.

And as the story propelled itself to its conclusion I was left thinking that Phillip K. Dick would approve of this book... a helluva lot.