Book Review - Half a King by Joe Abercrombie

I must admit I approached this book with some trepidation. Joe Abercrombie... Lord Grimdark... writing YA?!? The sky must be falling, I thought. Surely someone is taking the piss... having a lend... the man who arguably ushered in a new era of dark and gritty fantasy was writing a book that was classified as YA? Who came up with that April Fools joke?

Alas it was true. I thought this would be the end of Lord Grimdark. Imagine my surprise when i realised, after reading Half a King, that I was wrong. 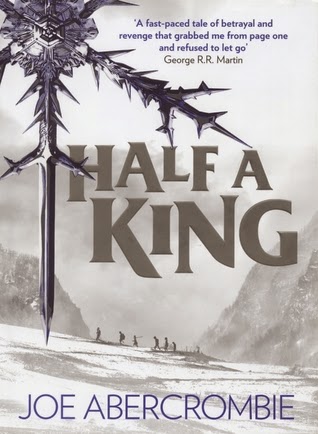 Half a King focuses on the tale of Prince Yarvi, a second son of a proud king, who loses his claim to the throne via treachery and betrayal. He swears an oath to retake what is rightfully his, but in order to do so he must first overcome cruelty, horrendous obstacles, and unforeseen events that spiral out of control. And he must do this with only half a hand (a birth defect has left him with only a mangled stump for one arm).

Half a King is a cracking read. Easily accessible (as most YA fiction is), fast paced, intriguing and downright hilarious at times. His characters are well portrayed and diverse (Yarvi and Nothing especially), and the sprinkling of world building and clues throughout the text kept me intrigued as the story unfolded. There is enough grit in the plot for a reader to recognise Abercrombie's stamp, but not too much so that it would deter younger readers. The conclusion to the story is both satisfying and full of questions, and it leaves it nicely open for the next instalment.

When I thought about any criticisms I might have about this book I didn't come up with much... it is that polished (arguably Abercrombie's most polished work yet!). If you are a YA snob, like I used to be, then I will say this. Pull your head out of your behind and read this book!

Note - Image is the property of Harper Voyager
Posted by Smash Dragons at 09:33