Vikings... warring factions... powerful and malevolent forces at play... what more could you want in a book? Blood Will Follow encompasses all of these and more. The sequel to Swords of Good Men, Blood Will Follow opens after the siege of Stenvik as Ulfar, Audun, Valgard and Finn all deal with the events that occurred in Swords of Good Men. They soon realise that they will have very important roles to play as the battle for supremacy between the old ways and the White Christ plays out. 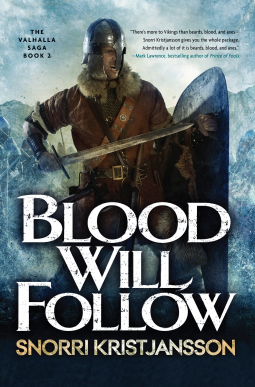 I have to admit that I was really looking forward to reading Blood Will Follow. I thought the first book in the Valhalla Saga (Swords of Good Men) was awesome, and I was excited to dive into a fast paced and action packed Viking fantasy again. Unfortunately, Blood Will Follow is a different sort of beast to Swords of Good Men. Slower and more measured, Blood Will Follow really pushes character development to the forefront of the novel. Characters like Ulfar, Audun and Valgard are pushed to their limits, and we see them and others grow in ways we possibly couldn't have imagined. This is not necessarily a bad thing, but I will admit that I was hoping for another slick and faster paced tale like Swords of Good Men was.

Therein lies my dilemma. Blood Will Follow obviously is building to something massive and hugely epic. Kristjansson originally laid the foundations for his world in Swords of Good Men and has built upon them in great detail in Blood Will Follow. I still adored how his world brimmed with instances of magic, old gods walking around, and historical nuances that added a depth and richness to his setting. But by the end of it I was left feeling a little disappointed. I wanted more action... more violence... more Swords of Good Men actually. Structurally Blood Will Follow was a little more polished then Swords of Good Men, and I thought Kristjansson handled the shifts in points of view better in this novel. There are also still a few moments that will blow your mind, and the plot is building nicely to something that will hopefully explode in the third novel. However, by the end of it I still wanted more clashes and action sequences.

In saying that Blood Will Follow is still an enjoyable and solid read. I suspect it probably is suffering from middle book syndrome a little, and that the third instalment in the series will blow my head off like Swords of Good Men did. All in all well worth your time, especially if you like the first book and/or are fans of the likes of Gemmell and Lawrence.

smashdragons.blogspot.com.au
Posted by Smash Dragons at 10:37